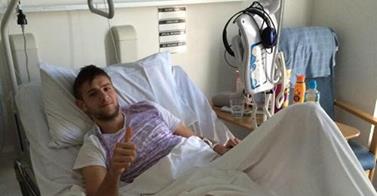 into a match against Hungerford that was eventually abandoned by the referee because of the severity of the injury. Surgery was successful, and Dean is on the mend now, but as a non-league player with just a regular day job, he’s not exactly raking in the cash. If he ever wants to play again — and doctors have told him his career is likely over — he’ll need extensive rehab to get his leg back to full strength. Read More….